She was born when her father was deployed in Kuwait during the Gulf War, suggesting that her birth date is between August and December 1990.

Amanda and her sister, Emmalin were best friends with Jeremy Sherwood as their families have known each other for many years. She and Jeremy began a romantic relationship, but it was frowned upon by their parents.

In the Season 1 finale, Amanda was killed from The Hump Bar explosion; at the time of her death, she was due to begin college at the University of Virginia, majoring in political science 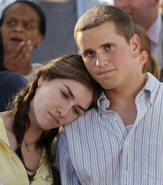 Amanda Joy and Jeremy
Add a photo to this gallery
Retrieved from "https://armywives.fandom.com/wiki/Amanda_Joy_Holden?oldid=4830"
Community content is available under CC-BY-SA unless otherwise noted.